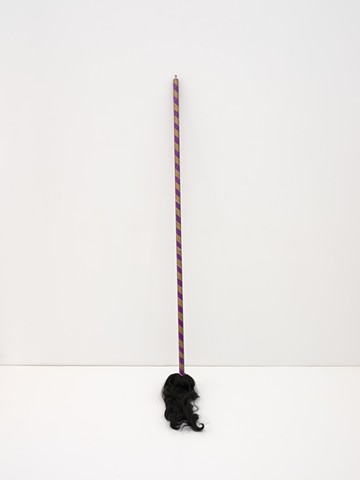 Universal Reformer No. 0012, Nadia (You'll have to eat air here. But watch out, air is fattening)
Broomstick, lackpaint, hair piece
Variables
< previous next >

(crowd cheering) A ten has gone on the board. That’s perfection, and that is Olympic Hstory for Nadia Comaneci. Well it feels great to come back to Montreal, always emotions when I come here, even though I’ve been a couple of times since the games of 76. Just because I also lived here for a year and a half. And everything that’s happening today with me, and my life, it’s because of that moment that happened here in Montreal. (cheering and applause) An extraordinary composed young lady at the age of 14. Yes, I was a kid but I think I knew what I was doing, you know people they were thinking that I was a kid, but I thought that in my gymnastics, I’ve been so many years into the sport, that I didn’t consider myself a young person.I just thought about, you know, I know what I’ve done in training, this is what I am supposed to do here, just to be able to concentrate. Ofcourse I was overwhelmed by so many people because there was a big arena, and a lot of noise from every direction. But I think I was prepared for that, and I was telling to myself all the time. You know, this is the Olympics. I cannot make a mistake. This is one shot. (cheering and applause) 10 she’s got. She’s got another 10. (cheering and applause) It is quite incredible. I didn’t.. I knew that 10 was a big deal, because I’ve done gymnastics for eight, nine years before, and I’ve done competitions and I did the same routine before, but.. because I was too young to understand that. And I think it was better that I didn’t understand. I didn’t come to Montreal to make history, I didn’t even know what that meant, to make history. Nobody told me that a perfect ten was never scored before in Olympic history. So I just went to do whatever I planned to do, and whatever I trained to do. Faultless. Absolutely faultless. She is a magnificent gymnastic. The older I get, I realise, that what I’ve done was such a big thing, which I didn’t realise then. You’re 14 and when I look around and see kids that are 13, 14 year old, and I think I was that age when I thought I know what I’m doing, I’m gonna go to the Olympics. I still question myself how a little kid, has that kind of drive to be able to do that. You just go girl! That was what I was saying. Never give up and follow what you feel inside your heart. Olympic Champion: Nadia Comaneci. Romani. (applause and cheering) Nadia became my personal hero when I was 5 years old. I told my mother I wanted to do gymnastics. It was not allowed. I was too young. I was angry and would sit in the sportshall with an angry face looking at the older girls who were lucky enough to walk on beams and turn on bridges..Everyday I would ask if I was olfd enough now? NO! Nadja Comaneci was born in the town of Onesti, Romania on November 12, 1961, she started training with gymnastics at the age of six, and she had her first international competition when she was only 10 years old Comaneci was political gold for Ceausescu in every sense of the word and because of that she was closely guarded. After a major international competition, Ceausescu would go on foreign tours, he said. “She had a great reputation that wasn’t just [good] for Romanian sport, but also for Romania." Nicolae Ceausescu used her fame, personally and politically. Thanks to the legion of agents infiltrated into the elite gymnastics camp, the communist regime was briefed about what was happening between the coaches and their gymnasts. (applause and cheering)