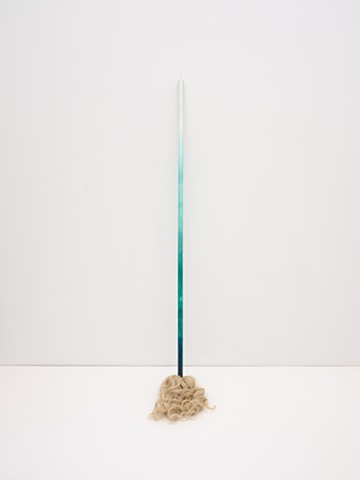 Universal Reformer No.0008, Beach ( I am a Citizen of the wooooorld)
Broomstick, lackpaint, hair piece
Variables
$1100
< previous next >

Life is one Joyceous Journey! Each Search must end with a new Quest! sayssss Sylvia Beach. I fell into her shop by coincidence. EUREKA! Did I know a woman with the same name as me created a heaven of Literature? If the world’s dwindling independent bookstores have a patron saint, an exemplar to cling to in moments of duress, she is Sylvia Beach, the soulful and fearless owner of Shakespeare & Company, the English-language bookstore she founded in Paris in 1919 and operated on the Left Bank until the German occupation during World War II. Who would have thought that one of the movers and shakers of the Western literary world would be a girl from Baltimore? Sylvia Beach, a Presbyterian pastor’s daughter, grew up in New Jersey with dreams of moving to Paris, then the literary hub of Europe, with an “obsession” to have a bookshop of her own. Soon, her rag and bone shop Shakespeare and Company became a haven for ex-pats, iconoclasts, and the wayward, among them Gertrude Stein and Alice B. Toklas, the Pounds, Sherwood Anderson, Ernest Hemingway, Samuel Beckett, Louis Aragon, and countless others who Beach affectionately called “the crowd.” To this day, the bookshop on the Left Bank of Paris (although not its original location) serves as a haven for anyone willing to put in some work for a cozy bed and historic board. In her charming book, Shakespeare and Company, Beach notes that “every boat from the other shore brought more customers for Shakespeare and Company” and that these “wild birds” were enticed by the presence in Paris of Joyce, Pound, and Picasso. The self-professed “Mother Hen of the 20s” jokingly remarked that with all the comings and goings, “I can hardly get any work done!” What an absolutely exhilarating time Paris of the 1920s must have been. And despite the notable interruptions, get work done she most certainly did. She and Adrienne Monnier were leading figures among the brilliant Left Bank lesbians of the era, along with Stein and Toklas. The novelist Katherine Anne Porter described Beach as, “a thin, twiggy sort of woman, quick-tongued, quick-minded and light on her feet,” adding, “Her nerves were as tight as a tuned-up fiddle.” Every struggling artist should be lucky enough to have a Sylvia Beach in his or her corner. She knew everybody! She was part of a family of daughters, and all of them were strong autonomous interesting women. None of them seemed to have a sense that there was anything they couldn’t do, being women. Sylvia Beach, who loved books, had a dream of opening a bookshop. That’s all. She didn’t have a dream of attaching herself to a writer, or publishing books, or being a writer herself. She wanted to create a gathering-place for book lovers. Beach introduced Sherwood Anderson to Gertrude Stein and F. Scott Fitzgerald to James Joyce, and knew everyone. She describes a reading in her bookstore, given by Hemingway and Stephen Spender, during which beer and whiskey were âdisplayed on the table in front of the boys, of which they were partaking freely. The sight of this made Joyce stand up and leave. It “made him too thirsty,” she writes, “to stand it any longer.”Beach, a popular giver of dinner parties and a bohemian cult hero, was unpretentious. Inviting the writer Bryher to a reception, she wrote: “You know it won’t be at all formal, never is in our house, and people don’ dress up here. I never wear an evening gown no matter what they invite me too – haint got none.”