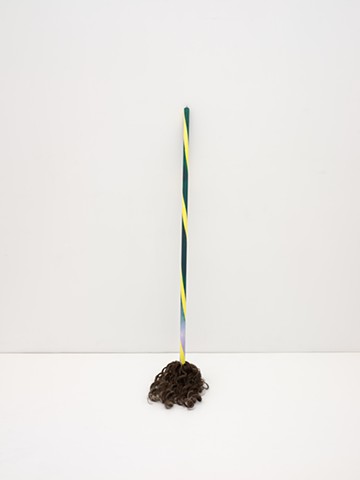 Nice to be here with you. You know, I have been here very often, and the first time was a long time ago. One day I went to Berlin and saw the work of Isa Genzken and I kept looking. I kept looking and looking. She kept bringing up new ideas, new questions, new images, new feelings, new stories, new actions, new words, new dreams, new sculptures, new actors, her work remains dedicated to challenging the viewer’s self-awareness by means of physically altering their perceptions, bringing bodies together in spaces and integrating elements of a mixed media into sculpture. Well...I knew I was an artist the moment I woke up in my mother’s belly and, as an artist, I shouldn’t have to give interviews. You once said, I think my work is very difficult to understand. Sometimes people do and sometimes they don’t. I can’t do much about that. Why do you think your art is difficult to understand? Because “hip-hop” art is simpler and more comprehensible for most people. In one of the portraits of yourself at the MoMA exhibition, you are gazing at a photograph of Andy Warhol. Is he an influence of yours? As a matter of fact, when I showed my “HiFi-Series” to Gerhard Richter in the early ’80s, he bought it and said, “This is better than Andy Warhol." It’s important not to be all tensed up in the visual work one is doing. One has to maintain one’s sense of humor and wit. A man with special wit that I particularly liked was Joseph Beuys. I was privileged to encounter him several times when he was alive. He had a unique face. Crazy—I was fascinated by it. He actually kissed my hand once and said, “You are my teacher." Yes, this one is "David" by Michelangelo, and it was always David and Michael Jackson. David is what he always wanted to be like, of course—all these cosmetic operations. He wanted to be the most beautiful man in the world, like David. There is also a nicely artificial intimacy to this. In the next piece, Michael Jackson comes in more directly, with the imagery—in the first two pieces there is no imagery of him. Here you have these different posters of him, which make up most of the surface of this piece. Is this a set of posters? No, I made them. Rather, I had them made—I went to a printer and they made them for me. They are from one particular photo shoot from 1987 by Annie Leibovitz, and I had them printed at this size. It’s all about his movements for me, as his dancing is the best thing in the world. Right. I was reminded of just how good the dancing actually is when I saw this recent film of his rehearsals for this last tour that never happened. The dancing and movement was quite clearly a key to the delivery of the whole package. His movements were so complex—not only the fact that there was all sorts of very dynamic running around and jumping going on, but just even the way that his arm would move from above his shoulder to his waist, for example—a simple movement like this would involve a five-step mini-choreography, made up of very small movements. Aside from this, are there other aspects of Michael Jackson you are attracted to? It’s the whole package, the whole thing—the way he talks, the way he moves, the way he does things. It’s the whole that is attractive to me. There is a total gesture there? A complete action, somehow? Yes, complete—really. But of course this piece is only able to deal with a small part of him. I mean, what can I do? But he’s this incredible fugue, anyhow. It’s the admiration I have for him — total admiration!