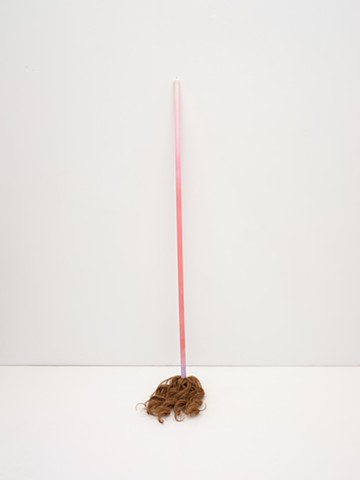 Universal Reformer No. 0004, Simone DB, (I was made for another planet altogether. I mistook the way)
Broomstick, acrylics, hairpiece
Variables
< previous next >

(read out loud) I aaaaaam Existential! Boom. Fortune smiles upon my countenance. All things blosssssssom. In the gentleness of my LOVE! LOVE! AND! LOVE! MORE! La Force de l’Age, l’Amour. Few tasks are more like the torture of Sisyphus than housework, with its endless repetition: the clean becomes soiled, the soiled is made clean, over and over, day after day. The housewife wears herself out marking time: she makes nothing, simply perpetuates the present … Eating, sleeping, cleaning – the years no longer rise up towards heaven, they lie spread out ahead, grey and identical. The battle against dust and dirt is never won. Simone De Beauvoir came to me when I moved the Capital of Belgium, Brussels, to study theatre at the Royal Academy. While going deep into the psyche of the human being to understand human nature to master the art of being an actress, I found a book of De Beauvoir and kept it in my pocket. La Force de l’Age. We became insaparable. SHe travelled during wartimes and I saw the similarities. Simone de Beauvoir, in full Simone-Lucie-Ernestine-Marie Bertrand de Beauvoir, born January 9, 1908, Capricorn ofcourse, French writer , feminist, member of the intellectual fellowship of philosopher-writers who have given a literary transcription to the themes of existentialism. She is known primarily for her treatise Le Deuxième Sexe, 2 vol, It became a classic of feminist literature. All oppression creates a state of war, this is no exception. If so few female geniuses are found in history, it is because society denies them any means of expression. Like Simone Weil, social political philosopher and spiritual thinker. La personne et le Sacre. Suppression does not lead to rebellion, is her conclusion after working in a factory, keeping a diary, on the contrary it leads to compliance and apathic behaviour. Whether the mask is labeled fascism, democracy, or dictatorship of the proletariat, our great adversary remains the apparatus - the Ceeeeentral Bankers, the Farrrrrrmaceutical Maaaaaaffia, the Eugeeeeeeenicists, the Blaaaaaack Nobelity, the Technocrrrrrrrratic Billionaires, Billionaires and more Billionaires, the bureaucracy, the police, the military. Not the one facing us across the frontier of the battle lines, but the one that calls itself your protector and makes you its slaves. No matter what the circumstances, the worst betrayal will always be to subordinate oneself to this apparatus and to trample underfoot, in its service, all human values in the self and in others. Image: Pieter Huybrechts