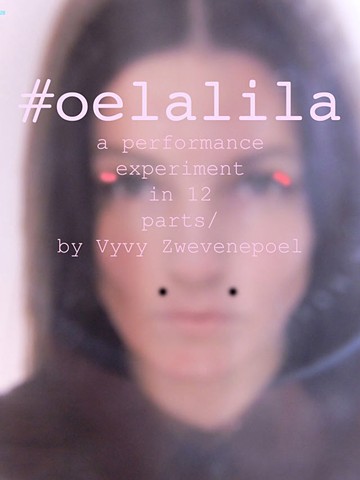 #oelalila is a performance experiment in 12 parts by Vyvy Zwevenepoel. When she moved in her studio (atelier1.10)at de bouwmeesterstraat in December, She wanted it to become a space where art is made and where art is shown.She started with drawing a 'holy square' in her white studio. This space which she clearly separated from the rest of the space by white ducktape, she calls the 5th dimension which is now clearly separated from the 5th dimension. And this will become the center or basis of the whole experiment. 'The 5th dimension is a certain vibration and a very pure frequency. THe organisation of this 5th dimensional community is the natural result of the integration of these energies through the individuals that are staying here. In the 5th dimension everything is possible.' It was a serious decision I had to make. So the purpose of her building her atelier/gallery is not unlike the purpose of religious buildings. Everything that will appear in the 'holy square' will be influenced by the energy of the 5th dimension. She calls it simply as that. It's a very religious experiment but has no roots in the institutional religions that are build very intelligently as a web through society to disempower the unconscious people, so by religious she connects with the oldest religion on planet earth. The act of ritual in performance will be explored and practiced whereby not only the performer is the one who creates but by which the attendant is just as much responsible in the act of creation.the relationship between performer/viewer and the investigation in the ACT of performing. Like how does the amount of public influence the performer and vice/versa. She has transformed her atelier in a space where she both can experiment with the act of creation and with the act of performance. It's an investigation in the being of the artist as performer in it's own atelier. Every month she will invite another performance artist and asks them to become who they wanna be as their ultimate being or what their vision of a perfect world is. THis goes together with the act of conversation where both artists prepare for their performance with acts of astral travelling, channeling the higher gods, doing mindaltering movements Besides that it's an investigation on the influence of performance on the viewer. #oelalila is a newly created onomatopee that she describes as 'scream of wonder, the sound you make when you see something extraordinary'. Vyvy has created a space inside her atelier that she will use for acts of performance and the act of creation.Inspired by the book 'STUDIO AND CUBE' On the relationship between where art is made and where art is displayed'by Brian O'Doherty. She will use her atelier both as a place where she can create and display art and thereby investigate the relationship between artist and artwork. How does a space transform when it used for private creation into a space that is open to the public? She is both a visual artist and a performer. So this implies that the project is about the impact of sound on the human being, playing with language and creating a new language (in order to create a new world) as she explains it. The experiment is definately very idealistic. She calls it an act of love, an experiment where everything is possible and where both viewer/public and performer(even though she also wants to play with the border between performer and public)Who exactly is the performer here?? will have an extraordinary experience. It is her idea to invite one other artist every month to do a performance at her atelier which she calls atelier 1.10. SHe hes build a 'holy square' inside the atelier. 7 by 7m.

It will be about roleplaying. It's about female genius/power/visionaries in the artworld.